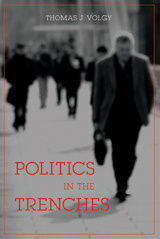 Ask most Americans what they think of politics and you'll likely get an earful. With suspicion and distrust of public servants running high, many citizens seem dispirited by the very process that has made the United States a showcase for democracy.

Now ask Tom Volgy. This former mayor of a major western city, who is also a political scientist, contends that most elected officials are the very opposite of what the public thinks: honest, hardworking people whose real work goes unnoticed by most of their constituents and the media.

Volgy has interviewed more than 300 elected officials—mayors, city council members, legislators—from all over the United States to offer a decidedly contrarian view of politics. He explores the lives and working conditions of elected officials at the local level— the area of democracy closest to the public— to show that officeholders are for the most part average citizens, not the slick lawyers or political pros we usually imagine them to be. Most are motivated by a sense of civic duty, and they often work for token salaries, yet once elected they give up their personal lives and fall prey to every conceivable brickbat of public and media outrage.

In Politics in the Trenches, Volgy shows what really happens behind the scenes of government. He contrasts perception with reality regarding the rewards and perks of office. He examines the process of experimentation in the political laboratory and shows how the news media distort it. He provides a case study of homelessness to illustrate the system's constraints and limitations. And he offers a chapter on a typical week in office that will be an eye-opener for most readers.

Although admittedly there are many flaws in the democratic political process, observes Volgy, all are correctable as long as citizens believe in the essential worth of the system itself. His book offers a fresh perspective on democratic governance and tackles tough issues such as campaign finance reform, urging citizens to understand the process before they condemn its players out of hand. More than that, this is a call to action, warning us that we could lose true democracy if we don't get involved.
TABLE OF CONTENTS