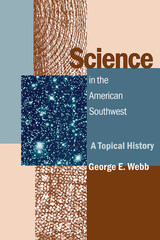 Science in the American Southwest: A Topical History
by George E. Webb
University of Arizona Press, 2002
Cloth: 978-0-8165-2188-3
As a site of scientific activity, the Southwest may be best known for atomic research at Los Alamos and astronomical observations at Kitt Peak. But as George Webb shows, these twentieth-century endeavors follow a complex history of discovery that dates back to Spanish colonial times, and they point toward an exciting future. Ranging broadly over the natural and human sciences, Webb shows that the Southwest—specifically Arizona, New Mexico, and west Texas—began as a natural laboratory that attracted explorers interested in its flora, fauna, and mineral wealth. Benjamin Silliman's mining research in the nineteenth century, for example, marked the development of the region as a colonial outpost of American commerce, and A. E. Douglass's studies of climatic cycles through tree rings attest to the rise of institutional research. World War II and the years that followed brought more scientists to the region, seeking secluded outposts for atomic research and clear skies for astronomical observations. What began as a colony of the eastern scientific establishment soon became a self-sustaining scientific community. Webb shows that the rise of major institutions—state universities, observatories, government labs—proved essential to the growth of Southwest science, and that government support was an important factor not only in promoting scientific research at Los Alamos but also in establishing agricultural and forestry experiment stations. And in what had always been a land of opportunity, women scientists found they had greater opportunity in the Southwest than they would have had back east. All of these factors converged at the end of the last century, with the Southwest playing a major role in NASA's interplanetary probes. While regionalism is most often used in studying culture, Webb shows it to be equally applicable to understanding the development of science. The individuals and institutions that he discusses show how science was established and grew in the region and reflect the wide variety of research conducted. By joining Southwest history with the history of science in ways that illumine both fields, Webb shows that the understanding of regional science is essential to a complete understanding of the Southwest.
TABLE OF CONTENTS