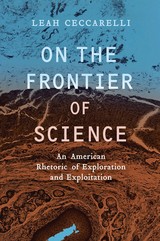 “The frontier of science” is a metaphor that has become ubiquitous in American rhetoric, from its first appearance in the public address of early twentieth-century American intellectuals and politicians who aligned a mythic national identity with scientific research, to its more recent use in scientists’ arguments in favor of increased research funding. Here, Leah Ceccarelli explores what is selected and what is deflected when this metaphor is deployed, its effects on those who use it, and what rhetorical moves are made by those who try to counter its appeal. In her research, Ceccarelli discovers that “the frontier of science” evokes a scientist who is typically male, a risk taker, an adventurous loner—someone separated from a public that both envies and distrusts him, with a manifest destiny to penetrate the unknown. It conjures a competitive desire to claim the riches of a new territory before others can do the same. Closely reading the public address of scientists and politicians and the reception of their audiences, this book shows how the frontier of science metaphor constrains American speakers, helping to guide the ends of scientific research in particular ways and sometimes blocking scientists from attaining the very goals they set out to achieve.
AUTHOR BIOGRAPHY

Leah Ceccarelli is Associate Professor and Associate Chair in the Department of Communication at the University of Washington.