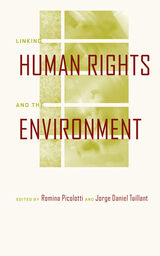 All over the world, people are experiencing the effects of ecosystem decline, from water shortages to fish kills to landslides on deforested slopes. The victims of environmental degradation tend to belong to more vulnerable sectors of society—racial and ethnic minorities and the poor—who regularly carry a disproportionate burden of such abuse. Increasingly, many basic human rights are being placed at risk, as the right to health affected by contamination of resources, or the right to property and culture compromised by commercial intrusion into indigenous lands.

Through examples ranging from water rights to women's rights, this collection offers practical ways in which environmental protection can be approached through human rights instruments. The volume reproduces a legal brief (amicus curiae) filed before an international human rights tribunal making the human rights and environment linkage argument, and includes the subsequent precedent-setting decision handed down by the Inter-American Court on Human Rights recognizing this linkage.

Linking Human Rights and Environment is a valuable sourcebook that explores the uncharted territory that lies between environmental and human rights legislation. More than a theoretical treatise, it argues that human rights activism presents a significant opportunity to address the human consequences of environmental degradation and can serve as a catalyst for inspiring ideas and action in the real world.
AUTHOR BIOGRAPHY
Romina Picolotti and Jorge Daniel Taillant are cofounders of the Center for Human Rights and Environment (www.cedha.org.ar), a nonprofit organization based in Argentina that promotes sustainable development through the promotion of the symbiotic relationship existing between the environment and people. Taillant is its executive director, and Picolotti is the director of its Access to Justice Program.
TABLE OF CONTENTS


FOREWORD Durwood Zaelke
ACKNOWLEDGMENTS
INTRODUCTION
1 The Environmental Jurisprudence of International Human Rights Tribunals
Dinah Shelton
2 The Right to the Conservation of the Environment
Alexandre Kiss
3 Agenda 21 and Human Rights
The Right to Participate
Romina Picolotti
4 Public Participation in the Era of Globalization
Claudia Saladin
5 The Right to Water as a Human Right
Ignacio J. Alvarez
6 Women’s Rights and the Global Population Crisis
Michael G. Shaw
7 How Human Rights Norms Can Contribute to Environmental Protection
Some Practical Possibilities within the United Nations System
Caroline Dommen
8 Environmental Advocacy and the Inter-American Human Rights System
Jorge Daniel Taillant
9 Sharing Common Ground
A Cautionary Tale on the Rights of Indigenous Peoples and the Protection of Biological Diversity
Annecoos Wiersema
10 The Mayagna Indigenous Community of Awas Tingni and Its Effort to Gain Recognition of Traditional Lands
The Community’s Case before the Human Rights Institutions of the Organization of American States
S. James Anaya