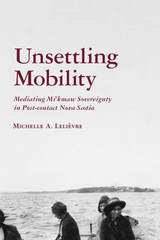 Since contact, attempts by institutions such as the British Crown and the Catholic Church to assimilate indigenous peoples have served to mark those people as “Other” than the settler majority. In Unsettling Mobility, Michelle A. Lelièvre examines how mobility has complicated, disrupted, and—at times—served this contradiction at the core of the settler colonial project.

Drawing on archaeological, ethnographic, and archival fieldwork conducted with the Pictou Landing First Nation—one of thirteen Mi’kmaw communities in Nova Scotia—Lelièvre argues that, for the British Crown and the Catholic Church, mobility has been required not only for the settlement of the colony but also for the management and conversion of the Mi’kmaq. For the Mi’kmaq, their continued mobility has served as a demonstration of sovereignty over their ancestral lands and waters despite the encroachment of European settlers.

Unsettling Mobility demonstrates the need for an anthropological theory of mobility that considers not only how people move from one place to another but also the values associated with such movements, and the sensual perceptions experienced by moving subjects. Unsettling Mobility argues that anthropologists, indigenous scholars, and policy makers must imagine settlement beyond sedentism. Rather, both mobile and sedentary practices, the narratives associated with those practices, and the embodied experiences of them contribute to how people make places—in other words, to how they settle.

Unsettling Mobility arrives at a moment when indigenous peoples in North America are increasingly using movement as a form of protest in ways that not only assert their political subjectivity but also remake the nature of that subjectivity.

Michelle A. Lelièvre is an assistant professor in the Department of Anthropology and the American Studies Program at the College of William and Mary. She has published in Anthropological Theory, the Journal of Archaeological Science, and Anthropologica.


List of Illustrations
Acknowledgments
A Note About Language and Names

Introduction: The End(s) of Settlement
1. The Sedentarist Ideology
2. Clam Beds and Arrowheads: An Indigenous Archaeography of Maligomish
3. Settled but Not Sedentary: Mi’kmaw Dwelling on Maligomish and Beyond
4. Pilgrimage and Propagation: The Mission of Mi’kmaw Catholicism
Conclusion: “In Restlessness, There Is Power”