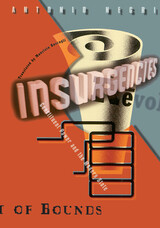 At a time when political paradigms are collapsing, and the death of Marxism and the Left is proclaimed, Insurgencies offers an intellectually invigorating and historically wide-ranging appraisal of the real legacy and promise of revolutionary thought and practice.

At the center of this book is the conflict between "constituent power," the democratic force of revolutionary innovation, and "constituted power," the fixed power of formal constitutions and central authority. This conflict, Antonio Negri argues, defines the drama of modern rebellions, from Machiavelli's Florence and Harrington's England to the American, French, and Russian revolutions. Insurgencies leads to a new notion of how power and action must be understood if we are to achieve a radically democratic future.

After living in exile in France for nearly fourteen years, Antonio Negri is currently serving a jail sentence in Italy, his home country, for his political activism in the 1970s. His conviction, which was based on the substance of his writings, led Michel Foucault to ask, "Isn't he in prison simply for being an intellectual?" Negri's works in English include The Savage Anomaly (1991) and, with Michael Hardt, Labor of Dionysus (1994).

Maurizia Boscagli is associate professor of English at the University of California, Santa Barbara.