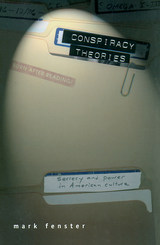 Fenster argues that conspiracy theories are a form of popular political interpretation and contends that understanding how they circulate through mass culture helps us better understand our society as a whole. To that end, he discusses Richard Hofstadter's The Paranoid Style in American Politics, the militia movement, The X-Files, popular Christian apocalyptic thought, and such artifacts of suspicion as The Turner Diaries, the Illuminatus! trilogy, and the novels of Richard Condon.

Fenster analyzes the "conspiracy community" of radio shows, magazine and book publishers, Internet resources, and role-playing games that promote these theories. In this world, the very denial of a conspiracy's existence becomes proof that it exists, and the truth is always "out there." He believes conspiracy theory has become a thrill for a bored subculture, one characterized by its members' reinterpretation of "accepted" history, their deep cynicism about contemporary politics, and their longing for a utopian future.

Fenster's progressive critique of conspiracy theories both recognizes the secrecy and inequities of power in contemporary politics and economics and works toward effective political engagement. Probing conspiracy theory's tendencies toward scapegoating, racism, and fascism, as well as Hofstadter's centrist acceptance of a postwar American "consensus," he advocates what conspiracy theory wants but cannot articulate: a more inclusive, engaging political culture.

"Fenster, a lone writer (the literary equivalent of a lone gunman, perhaps), segues from the novels of Thomas Pynchon to the Clinton Death List. . . . Conspiracy Theories is a dangerous book. I suspect 'they' (and you know who I mean, of course) will take care of this lone writer any day now."--Bookforum

"Fenster makes a powerful argument for regarding conspiracism as an integral product of the political system, reflecting inadequacies the establishment itself is blind to and expressing strong desires for the realization of frustrated ideals. Conspiracy Theories is a fascinating look at an important, little-studied topic. Informative and thought-provoking." --Philadelphia City Paper

"Fenster culls the liveliest counterintelligences out there--the Michigan Militia, religious millennialists, Chris Carter, even Oliver Stone--and sets them up as the last idealists. They might be obsessive and maniacal, but they're after a transparent political system, where big business and the government can be held accountable. Their 'paranoid style,' according to Fenster, is just old-school populism refitted for the media age." --Voice Literary Supplement

"Fenster makes a powerful argument for regarding conspiracism as an integral product of the political system, reflecting inadequacies the establishment itself is blind to and expressing strong desires for the realization of frustrated ideals. Conspiracy Theories is a fascinating look at an important, little-studied topic. Informative and thought-provoking." Philadelphia City Paper

"Fenster's careful examination of conspiratorial beliefs as evidence by right-wing groups, by various media, and even by those who devise such theories as a form of ludic or satiric endeavor (like Robert Anton Wilson) is revealing. And his articulation of the set of political-rather than pathological-reasons for their behavior is salutary." --American Book Review

"Fenster's extensive and impressive research provided a means of coming to terms with the radical disjunction between the interpretive framework which I used to understand events such as the one at Littleton, and a framework at odds with my own which was now confronting me on a daily basis." --Canadian Journal of Communication

"In this lively and wide-ranging critique, Fenster argues that conspiracy theories are attempts to engage in a more inclusive political culture." --Religious Studies Review

"Mark Fenster has provided a solid and illuminating study of the public's fascination with conspiracy theories and sets forth a stimulating correlation between the popularity of such theories and the social and political values of our society. This is a comprehensive and intriguing analysis of our often obsessive interest in conspiracy theories." --Gerald Posner, author of Killing the Dream : James Earl Ray and the Assassination of Martin Luther King, Jr. and Case Closed : Lee Harvey Oswald and the Assassination of JFK

"I find the issue of conspiracy theory compelling and appreciate Fenster's fruitful approach to what has been mysteriously ignored by the academy." --Barbie Zelizer, author of Covering the Body: The Kennedy Assassination, the Media, and the Shaping of Collective Memory

"Fenster shines a powerful light on the fantasies of secrecy that pervade American culture, illuminating both the way they originate and how they work. His analysis is theoretically acute, his criticism of previous scholarly studies is compelling, and he offers razor-sharp readings of an impressive array of movements, events, and cultural practices. He stands out, above all, for his ability to capture the power and appeal of conspiratorial understandings of politics even as he explains their fundamental political limitations. The only thing that can keep this book from having the impact it deserves is a vast, academic conspiracy." --Mark T. Reinhardt, Williams College

Mark Fenster received his Ph.D. in communication from the University of Illinois and his law degree from Yale University. He currently lives in Denver.