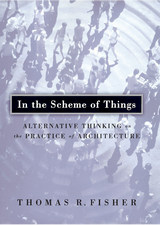 One of the field’s most innovative thinkers reconsiders the purpose and practice of architecture. At the dawn of the twenty-first century, architecture is in a state of crisis. Numbed by an ugly and shoddily constructed built environment and outraged by the cost of high-profile design projects, the public has become disinterested in and contemptuous of architecture as both a profession and an art. At the same time, some of our most creative designers have isolated themselves from the tastes and needs of mainstream society, reflecting a similar malaise found in design and architecture schools around the country. In this troubling climate, Thomas R. Fisher—who challenged architects as editorial director of Progressive Architecture, becoming recognized as one of the field’s most original thinkers—contends that the purpose and prospects of architectural practice must be reconsidered and reenergized. In the Scheme of Things looks at architecture’s need to respond creatively and meaningfully to the extraordinary changes affecting the profession now, changes that include the global economy, the advent of computer-aided design, and the growing disconnection between design schools, architectural practice, and the public.

In each of the twelve essays that comprise this timely volume, Fisher addresses issues of vital concern to architects and students, offering hard-hitting criticism and proposing innovative and practical ideas for reform at the level of both the individual practitioner and the profession as a whole. Through his thoughtful and nuanced consideration of architecture’s ideological foundations and its relationship to ecology, politics, and technology, as well as his subtle understanding of the architect’s interior life, Fisher challenges the demoralized design community to recapture its historical role as steward and visionary of the public realm.