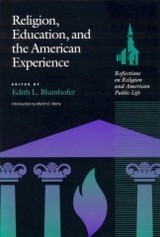 This collection of provocative and timely essays addresses the ways in which religious and educational institutions have come to define one another and American culture and identity.

Education in America-public and private, from the elementary to the university level-is the subject of urgent, ongoing debates. School vouchers, home schooling, prayer in the classrooms, sex education in the schools, and evolution versus creationism are just a few of the touchstones and flashpoints that have ignited a national dialogue concerning the role of religion in U.S. educational institutions.

The ten major essays assembled here emerged from a series of conferences conducted by the Public Religion Project at the University of Chicago Divinity School, funded by a grant from The Pew Charitable Trust. Written by recognized leaders in the fields of education and religion, the essays address such issues as the role of religious studies programs in tax-supported public universities; the evolving role of the university chaplain; the impact of religious doctrine on literary scholarship and the natural sciences; the college president as a spiritual leader; the secularization of private colleges whose foundations rest in the spiritual mission of a specific church or denomination and, conversely, the obligations, if any, of colleges that have maintained distinct denominational identities toward pluralistic outreach and openness; and an examination of the home schooling movement.

A true "dialogue" designed to inspire readers to rethink, argue, act, and continually converse on the subject, Religion, Education, and the American Experience will appeal to educators, college and university administrators, and boards of trustees, as well as academic libraries and scholars of education and religious studies.

REVIEWS
"From our three-year experience, we drew the conclusion that . . . the individuals with responsibility are often motivated by very particular religious visions and work out their vocations mindful of their responsibility to their audiences and their own hearts and consciences."
—From the Introduction by Martin E. Marty
— -