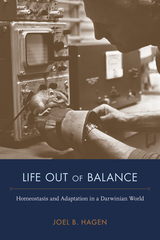 Life Out of Balance focuses on a period in history when new ideas of self-regulation, adaptation, and fitness became central to a variety of biological disciplines. During the decades surrounding World War II, these ideas developed in several quite different contexts and led to greater debates about the merits of such models as applied to larger systems, including society at large. Particularly in its later cybernetic form, homeostasis seemed to provide new ways of discussing balance and regulation that avoided discredited approaches of earlier champions of vitalism and mechanism. It provided a common perspective and terminology for discussing self-regulating “systems,” whether biological, mechanical, or social. Although enormously fruitful and influential, homeostatic perspectives also generated numerous controversies when critics questioned the degree to which biological systems are characterized by balance and self-regulation. Resolving these controversies continues to be a challenge in modern biology.

If natural selection constitutes the first law of biology, scientists who champion homeostasis as a theoretical model claim that it is a second law, equally important and closely related to the first. Such claims notwithstanding, homeostasis has generated a series of controversies since it was formalized by Walter Cannon in the late 1920s. Critics contended that Cannon took a too-optimistic view of life, not only ignoring pathological deviations from normality but also failing to adequately explain the ability of living things to respond adaptively to environmental challenges.

Underlying these controversies was the unresolved problem of integrating physiology and other areas of functional biology with the emerging evolutionary synthesis of Mendelian genetics and Darwinian natural selection. The physiological idea of homeostasis as the adaptive “fit” between the organism and its environment and the Darwinian idea of adaptation and fitness in terms of reproductive success might seem to be complementary in an unproblematic way, but historically they have had an uneasy relationship.
AUTHOR BIOGRAPHY

Joel B. Hagen is professor of biology at Radford University. He is author of An Entangled Bank: The Origins of Ecosystem Ecology and coauthor of Doing Biology.

Chapter 1. Adaptation and the Wisdom of the Body

Chapter 6. An Experimental Naturalist in the Laboratory and Field