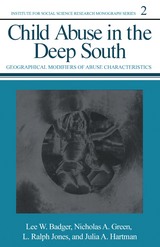 The recognition of child abuse as a troubling social and public health problem along with the documentation required by mandatory reporting laws have made possible the epidemiological investigation of risk factors association with child abuse. Child Abuse in the Deep South is a study of physical and sexual child abuse designed to measure the incidence of child abuse and neglect in the state of Alabama, identify the characteristics of confirmed abuse, and test the hypothesis that community size is a key, predictive variable in the surveillance, reporting, and caseworker determination of abuse. Child Abuse in the Deep South is based on a comprehensive review of more than seven thousand randomly selected narrative reports from the Alabama Central Registry.

A landmark finding in this study is that different combinations of cultural factors contribute to the physical and sexual abuse of black and white children in rural, small-town, and urban communities. The rates of abuse discovered and reported in small towns are revealed to be materially higher than those in rural or urbanized locations, especially for young white males, and the authors query whether this indicates higher rates of abuse or higher rates of reporting

Child Abuse in the Deep South provides a quantitative benchmark that investigators and policy-makers will find invaluable on the path to defining at-risk populations, effective interventions, and treatments.

AUTHOR BIOGRAPHY
Lee W. Badger received her master's degree from the University of Alabama School of Social Work and her Ph.D. in educational psychology/research in the University of Alabama College of Education. Badger's research interests and publications have focused on mental health issues in rural populations. Nicholas A. Green received his M.D. degree in 1956 from the Bowman Gray School of Medicine of Wake Forest University in North Carolina. Prior to joining the university faculty in 1983, Dr. Green was in private practice in Massachusetts and was director of psychiatry at the Framingham Youth Guidance Center of the Greater Framingham Mental Health Association. L. Ralph Jones received his M.D. degree in 1968 from the Kansas University School of Medicine. He is co-editor, with Richard R. Parlour, M.D., of Psychiatric Services for Underserved Populations. Julia A. Hartman received her master's degree in medical anthropology from the University of South Florida.
TABLE OF CONTENTS