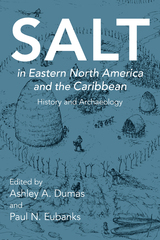 Case studies examining the archaeological record of an overlooked mineral

Salt, once a highly prized trade commodity essential for human survival, is often overlooked in research because it is invisible in the archaeological record. Salt in Eastern North America and the Caribbean: History and Archaeology brings salt back into archaeology, showing that it was valued as a dietary additive, had curative powers, and was a substance of political power and religious significance for Native Americans. Major salines were embedded in the collective memories and oral traditions for thousands of years as places where physical and spiritual needs could be met. Ethnohistoric documents for many Indian cultures describe the uses of and taboos and other beliefs about salt.

The volume is organized into two parts: Salt Histories and Salt in Society. Case studies from prehistory to post-Contact and from New York to Jamaica address what techniques were used to make salt, who was responsible for producing it, how it was used, the impact it had on settlement patterns and sociopolitical complexity, and how economies of salt changed after European contact. Noted salt archaeologist Heather McKillop provides commentary to conclude the volume.
.
AUTHOR BIOGRAPHY

Ashley A. Dumas is associate professor of anthropology and director of the Fort Tombecbe archaeological site, University of West Alabama.