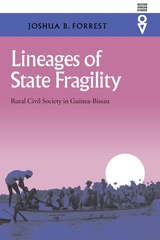 In Guinea-Bissau, as elsewhere in Africa, there is a disjuncture between the central state and rural civil society. It is this significant and overlooked aspect of Guinea-Bissau’s political evolution—the continuing ability of civil society to evade and thwart state power—that is at the heart of Joshua B. Forrest’s Lineages of State Fragility.

Professor Forrest argues that despite European influences, the contemporary fragility of African states can be fully appreciated only by examining the indigenous social context in which these states evolved. Focusing on Guinea-Bissau, Forrest exposes the emergence of a strong and adaptable “rural civil society” that can be traced back to precolonial times.

Lineages of State Fragility analyzes the social, political, and military experiences of this rural civil society to account for the origins of Guinea-Bissau’s soft state. For example, Forrest identifies interethnic social and military practices that became entrenched in rural social structures and continued to evolve through the colonial period, enabling Guinea-Bissauans to resist state predation.

Lineages of State Fragility offers an unorthodox explanation of African politics by tracing the direct social links among the precolonial, colonial, and postcolonial periods and affirms the role of rural actors in determining present-day political outcomes.

Based on remarkably extensive research conducted in archives in Guinea-Bissau, Senegal, and Portugal, Lineages of State Fragility represents both a new approach to the region’s past and present and an important synthesis of the political analysis that has come before.

Joshua B. Forrest is a research affiliate at the University of Pittsburgh’s Graduate School for Public and International Affairs, and associate professor of political science at the University of Vermont. He is the author of Namibia’s Post-Apartheid Regional Institutions: The Founding Year.