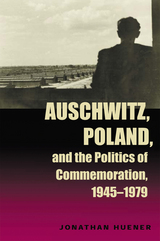 REVIEWS
“Jonathan Huener has written a magnificent book that will become mandatory reading for everyone interested in the Holocaust, Polish History, Jewish History, or the study of collective memory and commemoration…. This book is full of provocative insights and fascinating analysis, and is certain to generate a great deal of debate and discussion.”—Brian Porter, author of When Nationalism Began to Hate


“Auschwitz, Poland, and the Politics of Commemoration is ... a fascinating and engaging study that makes an important contribution to our understanding of the controversy over memory at Auschwitz and is a highly welcome addition to the growing body of literature on twentieth-century Polish-Jewish relations.”—Slavic Review