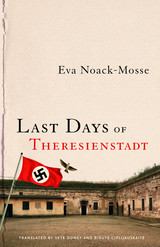 In February of 1945, during the final months of the Third Reich, Eva Noack-Mosse was deported to the Nazi concentration camp of Theresienstadt. A trained journalist and expert typist, she was put to work in the Central Evidence office of the camp, compiling endless lists—inmates arriving, inmates deported, possessions confiscated from inmates, and all the obsessive details required by the SS. With access to camp records, she also recorded statistics and her own observations in a secret diary.

Noack-Mosse's aim in documenting the horrors of daily life within Theresienstadt was to ensure that such a catastrophe could never be repeated. She also gathered from surviving inmates information about earlier events within the walled fortress, witnessed the defeat and departure of the Nazis, saw the arrival of the International Red Cross and the Soviet Army takeover of the camp and town, assisted in administration of the camp's closure, and aided displaced persons in discovering the fates of their family and friends. After the war ended, and she returned home, Noack-Mosse cross-referenced her data with that of others to provide evidence of Nazi crimes. At least 35,000 people died at Theresienstadt and another 90,000 were sent on to death camps.
AUTHOR BIOGRAPHY
Eva Noack-Mosse (1902–1990) was a member of a distinguished German-Jewish family of publishers, jurists, scholars, and philanthropists, and she was married to a non-Jewish German, factors that initially delayed her arrest and internment. She continued to live in Germany after the war. Skye Doney is the director of the George L. Mosse Program in History at the University of Wisconsin–Madison. Birutė Ciplijauskaitė (1929–2017) was a professor of Spanish at the University of Wisconsin–Madison.
TABLE OF CONTENTS