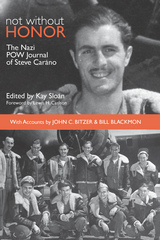 Not Without Honor threads together the stories of three American POWs—Carano; his buddy Bill Blackmon, who was also at Stalag 17 b; and John C. Bitzer, who survived the brutal “Death March” from northern Germany to liberation in April 1945. At times the journal reads like a thriller as he records air battles and escape attempts. Yet in their most gripping accounts, these POWs ruminate on psychological survival. The sense of community they formed was instrumental to their endurance. This compelling book allows the reader to journey with these young men as they bore firsthand witness to the best and worst of human nature.
TABLE OF CONTENTS