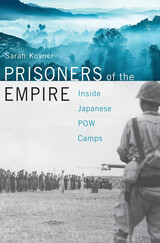 In only five months, from the attack on Pearl Harbor in December 1941 to the fall of Corregidor in May 1942, the Japanese Empire took prisoner more than 140,000 Allied servicemen and 130,000 civilians from a dozen different countries. From Manchuria to Java, Burma to New Guinea, the Japanese army hastily set up over seven hundred camps to imprison these unfortunates. In the chaos, 40 percent of American POWs did not survive. More Australians died in captivity than were killed in combat.

Sarah Kovner offers the first portrait of detention in the Pacific theater that explains why so many suffered. She follows Allied servicemen in Singapore and the Philippines transported to Japan on “hellships” and singled out for hard labor, but also describes the experience of guards and camp commanders, who were completely unprepared for the task. Much of the worst treatment resulted from a lack of planning, poor training, and bureaucratic incoherence rather than an established policy of debasing and tormenting prisoners. The struggle of POWs tended to be greatest where Tokyo exercised the least control, and many were killed by Allied bombs and torpedoes rather than deliberate mistreatment.

By going beyond the horrific accounts of captivity to actually explain why inmates were neglected and abused, Prisoners of the Empire contributes to ongoing debates over POW treatment across myriad war zones, even to the present day.

REVIEWS
Prisoners of the Empire forces readers to rethink the morality-tale version of cruel Japanese treatment of Allied POWs. Kovner is unflinching in presenting harsh treatment by Japanese prison commanders or guards and unsparing in her attention to racism on all sides. Above all, she is clear-eyed in explaining how confusion and ignorance, more than consistent policy, shaped this tragic episode in the fog of war.
-- Andrew Gordon, author of A Modern History of Japan


This innovative study of Japanese prisoner-of-war (POW) camps in Japan, Korea, the Philippines, and Singapore during World War II explores how they were administered and what the prisoners experienced…Kovner’s vivid, detailed inquiry throws light on a host of subjects, including the racial and gender attitudes of the many cultures that encountered one another in wartime Asia.
-- Andrew J. Nathan Foreign Affairs


A rigorous and wide-ranging study of Japan’s treatment of POWs during WWII…This revisionist history adds essential nuance and depth to an emotionally charged subject.
-- Publishers Weekly


[An] excellent and unemotional account…She is not unsympathetic to the former POWs but provides a nuanced and dispassionate interpretation of what happened to those who became Japanese prisoners between 1942 and 1945.
-- J. E. Hoare Asian Affairs


The main thesis of this book holds true across Asia: simplistic notions of culturally determined cruelty do not fully explain the maltreatment of POWs, even though the conduct of the Pacific war was clearly infused with racism on both sides. The chaos of war, and the plea of ‘military necessity’—alas, so often the trump card during warfare—played a major role in this woeful erosion of humanity.
-- Joan Beaumont Australian Book Review


A ground-breaking survey of selected Japanese POW camps during the Asia–Pacific War that will be the starting point for all future studies of this topic.
-- Samuel H. Yamashita Journal of Japanese Studies


A much-needed corrective to our understanding of Japanese treatment of Allied prisoners. The book is well researched, and the author’s ability to work with Japanese-language sources makes this an extremely valuable contribution to the field of POW scholarship. Kovner’s careful consideration of the source material, her clear and fluid prose, and her critical eye provide a nuanced analysis that is long overdue.
-- Derek R. Mallett Journal of Military History


Kovner argues that there was nothing inherent in the Japanese character or culture that led to the inhumane treatment of POWs by Japan during the Pacific War…Makes an important contribution to our understanding of internment practices throughout the twentieth century.
-- Mahon Murphy Monumenta Nipponica


Standing on impressive transnational research in government and nongovernmental archives, Kovner complicates the popular consensus that Japan’s treatment of Allied prisoners of war (POWs) during World War II was singularly cruel and a systematic effort. By meticulously tracing the steps and missteps of Japan’s management of POW camps across its vast wartime empire, Kovner adjudicates from official records that there is no evidence of any top-down directive or an inherent quality of Japanese culture that explains why prisoners suffered. Instead, Kovner cogently argues that maltreatment resulted from the absence of planning and indifference among senior Japanese officials.
-- Sandra H. Park Journal of Asian Studies


Kovner reformats the complex ‘morality play’ depicted in Western history of prisoner of war suffering during World War II. Looking at the entirety of the Japanese empire at war, and focusing on the camps as locales within a cascade of battles for power, she challenges preconceptions that abuse stemmed solely from bushido ideals gone wrong or specific policies of cruelty. By comparatively investigating a vast range of experiences and geographic sites, Kovner overturns our stereotyped perceptions and challenges our understanding of POW history.
-- Barak Kushner, author of Men to Devils, Devils to Men: Japanese War Crimes and Chinese Justice


In a major work of original scholarship, Kovner reveals that who lived and who died often resulted not from policy but incompetence—poor training, lack of planning, disregard for anything but military priorities. With impressive daring, she situates camp lives within the larger context of occupation policies, diplomacy, and international law, and describes the multiethnic world of hundreds of thousands of POWs, civilian internees including women and children, and guards in the Philippines, Singapore, Japan, and Korea. Prisoners of the Empire is a signal critical accomplishment.
-- Sabine Frühstück, author of Playing War: Children and the Paradoxes of Modern Militarism in Japan


In this ambitious study, Kovner moves beyond threadbare tropes of bushido and surrender-as-shameful to persuasively argue that Japanese treatment of POWs during World War II varied greatly across time and space—and cannot be fully understood without the broader context of Japanese diplomacy with the West, propaganda and strategic considerations, and the breakdown of discipline and logistics as Japan’s empire collapsed. Elegantly written and compulsively readable, this accessible narrative history will be of great interest to scholars and general readers alike.
-- Nick Kapur, author of Japan at the Crossroads: Conflict and Compromise after Anpo

TABLE OF CONTENTS
Cover
Title Page
Dedication
Contents
Introduction: A History Both Familiar and Strange
1. From Avatar of Modernization to Outlaw Nation
2. Singapore: World Gone Topsy-Turvy
3. The Philippines: Commonwealth of Hell
4. A War of Words
5. Korea: Life and Death in a Model Camp
6. Captivity on the Home Front
7. Endings and Beginnings
8. Undue Process
9. Prisoners of History: Renegotiating the Geneva Conventions in the Wake of War
Conclusion: Never Again, and Again
Notes
Archival Sources
Acknowledgments
Index