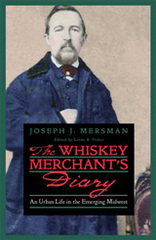 Joseph J. Mersman was a liquor merchant, a German American immigrant who aspired—successfully—to become a self-made man. Hundreds of the residents of Mersman’s hometown in Germany immigrated to Cincinnati in the 1830s, joining many thousands of other German immigrants. In 1847, at the age of twenty-three, Mersman began recording his activities in a bound volume, small enough to fit into his coat pocket. His diary, filled with work and play, eating and drinking, flirting and dancing, provides a unique picture of everyday life, first in Cincinnati and then in St. Louis, the new urban centers of the emerging Midwest.

Outside of Gold Rush diaries and emigration journals, few narrative records of the antebellum period have been published. Illustrated with photographs, maps, and period advertisements, the diary reveals how a young man worked to establish himself during an era that was rich in opportunity.

As a whiskey rectifier, Mersman bought distilled spirits, redistilled or reprocessed them to remove contaminants or increase the alcohol content, and added various flavorings before selling his product to liquor retailers. In his diary, he describes scrambling for capital, marketing his wares, and arranging transportation by steamboat, omnibus, and train. Although the business that he sought to master was eliminated by the passage of the Pure Food Law of 1906, Mersman, like most rectifiers, was a reputable wholesaler. Merchants like him played an important role in distributing liquor in nineteenth-century America.

Mersman confronted serious disease, both as a sufferer from syphilis and as a witness to two devastating cholera epidemics. Unlike other residents of St. Louis, who fled the relative safety of the countryside, he remained in the city and saw the impact of the epidemics on the community.

Linda A. Fisher’s extensive, insightful, and highly readable annotations add a wealth of background information to Mersman’s story. Her professional training and career as a physician give her a particularly valuable perspective on the public health aspects of Mersman’s life and times.

The late Linda A. Fisher was a public health physician, a trained documentary editor, and the author of a biography of Joseph Mersman's sister, Agnes Lake Hickok: Queen of the Circus, Wife of a Legend.