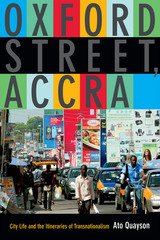 In Oxford Street, Accra, Ato Quayson analyzes the dynamics of Ghana's capital city through a focus on Oxford Street, part of Accra's most vibrant and globalized commercial district. He traces the city's evolution from its settlement in the mid-seventeenth century to the present day. He combines his impressions of the sights, sounds, interactions, and distribution of space with broader dynamics, including the histories of colonial and postcolonial town planning and the marks of transnationalism evident in Accra's salsa scene, gym culture, and commercial billboards. Quayson finds that the various planning systems that have shaped the city—and had their stratifying effects intensified by the IMF-mandated structural adjustment programs of the late 1980s—prepared the way for the early-1990s transformation of a largely residential neighborhood into a kinetic shopping district. With an intense commercialism overlying, or coexisting with, stark economic inequalities, Oxford Street is a microcosm of historical and urban processes that have made Accra the variegated and contradictory metropolis that it is today.
AUTHOR BIOGRAPHY
Ato Quayson is Professor of English and Director of the Centre for Diaspora and Transnational Studies at the University of Toronto. He is the author of Strategic Transformations in Nigerian Writing, Calibrations: Reading for the Social, and Aesthetic Nervousness: Disability and the Crisis of Representation, as well as editor of the two-volume Cambridge History of Postcolonial Literature, coeditor of A Companion to Diaspora and Transnational Studies, and General Editor of the Cambridge Journal of Postcolonial Literary Inquiry.
REVIEWS
-- Victoria Okoye The Guardian

1. Ga Akutso Formation and the Question of Hybridity: The Afro-Brazilians (Tabon) of Accra 37

3. Osu borla no, sardine chensii soo: Danes, Euro-Africans, and the Transculturation of Osu 98

4. "The Beautyful Ones": Tro-tro Slogans, Cell Phone Advertising, and the Hallelujah Chorus 129

6. Pumping Irony: Gymming, the Kòbòlò, and the Cultural Economy of Free Time 183