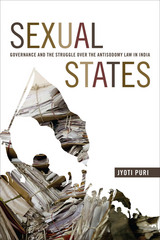 In Sexual States Jyoti Puri tracks the efforts to decriminalize homosexuality in India to show how the regulation of sexuality is fundamentally tied to the creation and enduring existence of the state. Since 2001 activists have attempted to rewrite Section 377 of the Indian Penal Code, which in addition to outlawing homosexual behavior is often used to prosecute a range of activities and groups that are considered perverse. Having interviewed activists and NGO workers throughout five metropolitan centers, investigated crime statistics and case law, visited various state institutions, and met with the police, Puri found that Section 377 is but one element of how homosexuality is regulated in India. This statute works alongside the large and complex system of laws, practices, policies, and discourses intended to mitigate sexuality's threat to the social order while upholding the state as inevitable, legitimate, and indispensable. By highlighting the various means through which the regulation of sexuality constitutes India's heterogeneous and fragmented "sexual state," Puri provides a conceptual framework to understand the links between sexuality and the state more broadly.
AUTHOR BIOGRAPHY
Jyoti Puri is Professor of Sociology at Simmons College and the author of Encountering Nationalism.
REVIEWS
-- Ratnabir Guha Telegraph India


-- Joseph J. Fischel Journal of the History of Sexuality

3. State Scripts: Antisodomy Law and the Annals of Law and Law Enforcement  49

4. "Half Truths": Racialization, Habitual Criminals, and the Police  74

5. Pivoting toward the State: Phase One of the Struggle against Section 377  101