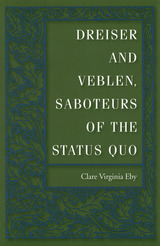 In this important interdisciplinary study, Clare Eby argues that the writings of Theodore Dreiser and Thorstein Veblen form a neglected chapter in the history of United States cultural criticism that is especially relevant today.

This study leaves behind the narrow frameworks through which most of Veblen's and Dreiser's writings have been interpreted, covering a wide range of both authors' major and minor works. Moving beyond Veblen's The Theory of the Leisure Class and Dreiser's Sister Carrie, Eby shows how the two writers, as saboteurs of the status quo, anticipated many preoccupations of cultural critics today: the cultural role of the intellectual, the relationship of science to society, the place of consumption in modern life, and the intersection of class, gender, and power.

Although Dreiser's interest in the natural and social sciences has often been noted, this study provides the only extended analysis of how his works actually resemble, and strive to become, critically informed social science. Similarly, despite the singularity of Veblen's rhetoric, the centrality of literary devices to his works has never been systematically examined. By placing the works of Veblen and Dreiser into dialogue, this study contributes significantly to the recent attempts to bring together the concerns of literary analysts and social scientists.

Clare Virginia Eby is Associate Professor of English at the University of Connecticut at Hartford and has published many articles on turn-of-the-century American literature and culture.