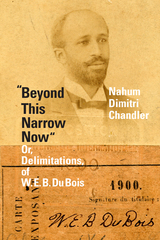 In “Beyond This Narrow Now” Nahum Dimitri Chandler shows that the premises of W. E. B. Du Bois's thinking at the turn of the twentieth century stand as fundamental references for the whole itinerary of his thought. Opening with a distinct approach to the legacy of Du Bois, Chandler proceeds through a series of close readings of Du Bois's early essays, previously unpublished or seldom studied, with discrete annotations of The Souls of Black Folk: Essays and Sketches of 1903, elucidating and elaborating basic epistemological terms of his thought. With theoretical attention to how the African American stands as an example of possibility for Du Bois and renders problematic traditional ontological thought, Chandler also proposes that Du Bois's most well-known phrase—“the problem of the color line”—sustains more conceptual depth than has yet been understood, with pertinence for our accounts of modern systems of enslavement and imperial colonialism and the incipient moments of modern capitalization. Chandler's work exemplifies a more profound engagement with Du Bois, demonstrating that he must be re-read, appreciated, and studied anew as a philosophical writer and thinker contemporary to our time.
AUTHOR BIOGRAPHY
Nahum Dimitri Chandler is Professor in the School of Humanities at the University of California, Irvine, author of X: The Problem of the Negro as a Problem for Thought and editor of The Problem of the Color Line at the Turn of the Twentieth Century: The Essential Early Essays by W. E. B. Du Bois.
REVIEWS
“Nahum Dimitri Chandler's "Beyond This Narrow Now" gives the reader the marvelous benefit of Chandler's exquisite knowledge of the DuBoisian oeuvre and his singular unrelenting commitment to tarrying with it. As one of our master teachers, Chandler is at his best here in leading us systematically, virtually line by line, through early Du Bois in his critical conceptual formation.”


Acknowledgments  vii
Note on Citations  xiii
An Opening—At the Limit of Thought, a Preface  xvii
A Notation: The Practice of W.E.B. Du Bois as a Problem for Thought—Amidst the Turn of the Centuries  1
Part I. "Beyond This Narrow Now": Elaborations of the Example in the Thought of W.E.B. Du Bois—At the Limit of the World  25
Part II. The Problem of the Centuries: A Contemporary Elaboration of "The Present Outlook for the Dark Races of Mankind," circa the 27th of December, 1899—Or, At the Turn of the Twentieth Century  145
Another Coda, the Explicit—Revisited  221
Notes  231
References  269
Index  291