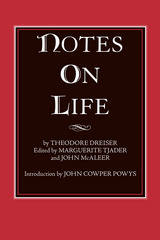 "It has long been known that Dreiser devoted much effort during the final two decades of his lfe to the preparation of a major philosophical work which remained unfinished at his death....The best evidence of Dreiser's later thought would appear to be [t]his treatise, and it is appropriate that Marguerite Tjader and John J. McAleer--the two Dreiserians most sympathetic to the mystical religiosity of the later Dreiser--should make it available in published form." --American Literary Realism

Theodore Dreiser,  (1871—1945), is one of the preeminent American novelists of the early twentieth century. His two best-known novels, Sister Carrie (1900) and An American Tragedy (1925) were ranked 33rd and 16th (respectively) on the Modern Library's 1998 list of the Best English-Language Novels of the 20th Century. Dreiser was also a prolific non-fiction writer, including his Notes on Life, which was published posthumously.