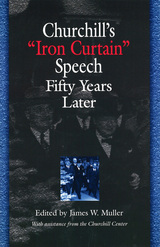 Winston Churchill's visit to Fulton, Missouri, on March 5, 1946, marked the first public recognition of the cold war that was to follow World War II. Churchill delivered his most famous speech, "The Sinews of Peace," which became best known by the phrase he used to describe the cold-war division of Europe, the "iron curtain."

In the United States and Britain, wartime alliances had fostered favorable feelings toward the Soviet Union. By 1946 democratic citizens on both sides of the Atlantic had begun to consider communist Russia a friend. In his speech at Fulton, Churchill exhibited breathtaking flexibility and a clear recognition of the main threat as he reminded the public that true friendship must be reserved for countries sharing a common love of liberty. The "Iron Curtain" speech defined postwar relations with the Soviet Union for citizens of Western democracies. Although it initially provoked intense controversy in the United States and Britain, criticism soon gave way to wide public agreement to oppose Soviet imperialism.

Opening with the full text of the address Churchill delivered in Fulton and concluding with Margaret Thatcher's fiftieth-anniversary address surveying the challenges facing Western democracies in this post-cold war climate, the book brings together essays that reflect on the past fifty years, recognizing Churchill's speech as a carefully conceived herald of the cold war for the Western democracies. These powerful essays offer a fresh appreciation of the speech's political, historical, diplomatic, and rhetorical significance.

James W. Muller is Professor of Political Science at the University of Alaska, Anchorage. He is editor of Churchill as Peacemaker and The Revival of Constitutionalism.