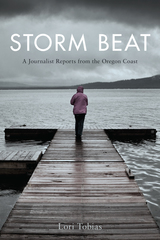 Journalist Lori Tobias arrived on the Oregon coast in 2000. After freelancing from Newport for several years, she signed on with the Oregonian as a stringer covering the coast from Florence to Astoria; later she would be hired as a staff writer responsible for the entire coast—one person for more than three hundred miles. The job meant long hours, being called out for storms in the middle of the night in dangerous conditions, and driving hundreds of miles in a day if stories called for it.

The Oregon coast is a rugged, beautiful place known for its dramatic landscapes and fierce storms. Separated from the state’s population centers by the Coast Range, it is a land of small towns reliant primarily on fishing and tourism. Many of the stories Tobias covered were tragedies: car crashes, falls, drownings, capsizings. And those were just the accidents; Tobias covered plenty of violent crimes as well, such as the infamous Christian Longo murders of 2001.

Tobias’s story is as much her own as it is the coast’s, and she takes the reader through familiar beats of life—learning to live on and cover the coast, regular trips back east as her parents age, the decline of journalism in the twenty-first century—and the unexpected, often unglamorous experiences of a working reporter, such as a bout of vertigo after rappelling from a helicopter. Storm Beat tells a compelling story of a land that many visit but few truly know.
AUTHOR BIOGRAPHY
LORI TOBIAS is a veteran journalist who freelances for local and national outlets, including the New York Times, Seattle Times, Denver Post, and 1859 Magazine. Storm Beat is her first book of nonfiction; her novel Wander won the Nancy Pearl Book Award for Best Book of Fiction from the Pacific Northwest Writers Association.