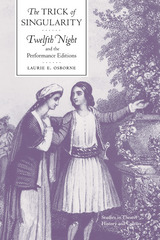 Because it appears in a relatively clean and dated version in the Folio, Twelfth Night seems to be exempt from arguments for variant texts—but there are significant and persistent variations represented in the performance editions. Osborne's careful reading of these provides a crucial bridge linking theatre history and textual criticism. She employs a wide variety of approaches and disciplines—Shakespearean and Renaissance studies, theatre history, gender studies, contemporary literary criticism, and cultural history—to provide a fresh and engaging yet rigorous view.


Table of contents:
1 - Double Dating
2 - Performance Editions and the Quest for the Original Twelfth Night
3 - Rearranging the Texts from Bell to Lacy and Beyond
4 - Textual Perversity in Illyria
5 - The Video Editions
6 - Displacing and Renaming Love: A Lacanian Reading
7 - “What's in a Name?”; Or What Do We Talk about When We Talk about Twelfth Night?