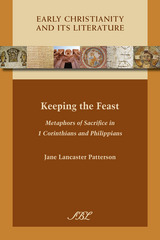 Patterson uses cognitive metaphor theory to trace the apostle Paul’s use of metaphors from the Jewish sacrificial system in his moral counsels to the Philippians and the Corinthians. In these letters, Paul moves from the known (the practice of sacrifice) to the unknown (how to live in accord with the life, death, and resurrection of Jesus Christ). Patterson illustrates that the significant sacrificial metaphors in 1 Corinthians and Philippians are not derived from Jewish sacrifices of atonement, but rather from the Passover and sacrifices of thanksgiving. Attention to these metaphors demonstrates that imagery drawn from these sacrifices shapes the overall moral counsel of the letters, reveals more varied and nuanced interpretations of sacrificial references in Paul’s letters, and sheds light on Paul’s continuity with Jewish cultic practice.

Jane Lancaster Patterson is Assistant Professor of New Testament at the Seminary of the Southwest in Austin, Texas. In addition to her teaching, she is an Episcopal Priest and Co-Director of St. Benedict’s Workshop, a ministry devoted to helping Christians live their faith in daily life.