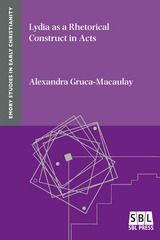 A new sociorhetorical study of Acts

In Lydia as a Rhetorical Construct in Acts, Gruca-Macaulay explores the sociorhetorical function of the story of Lydia, a named Lydian woman ancient interpreters would have associated with cultural stereotypes of Lydians. As a rhetorical figure, Lydia both influenced and was influenced by the ideology of the surrounding text in Acts 16, as well as the approach Luke–Acts as a whole takes to people who are somehow like Lydia.