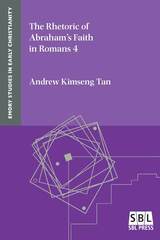 Explore Romans 4 from a sociorhetorical perspective

Andrew Kimseng Tan examines Romans using sociorhetorical interpretation to determine how Paul attempted to alleviate dissension between Judean (or “Jewish”) and non-Judean (or “gentile”) Christians. Through his analysis of Paul’s rhetoric, Tan reveals that Paul used Abraham’s faith in Genesis to demonstrate that the both groups were equally children and heirs of Abraham whose acceptance by God was through the same kind of faith that Abraham possessed, not through the Mosaic law, which Judean Christians claimed gave them a special honored status with God.

Andrew Kimseng Tan, whose PhD is from the University of Cape Town, serves as pastor of Tree of Life Christian Church in Singapore.