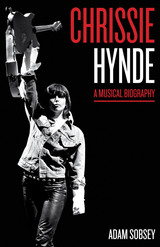 A musical force across four decades, a voice for the ages, and a great songwriter, Chrissie Hynde is one of America’s foremost rockers. Inducted into the Rock and Roll Hall of Fame in 2005, she and her band The Pretenders have released ten albums since 1980. The Pretenders’ debut LP has been acclaimed as one of the best albums of all time by VH1 and Rolling Stone. In a business filled with “pretenders” and posers, Hynde remains unassailably authentic. Although she blazed the trail for countless female musicians, Hynde has never embraced the role of rock-feminist and once remarked, “It’s never been my intention to change the world or set an example for others to follow.” Instead, she pursued her own vision of rock—a band of “motorcycles with guitars.”

Chrissie Hynde: A Musical Biography traces this legend’s journey from teenage encounters with rock royalty to the publication of her controversial memoir Reckless in 2015. Adam Sobsey digs deep into Hynde’s catalog, extolling her underrated songwriting gifts and the greatness of The Pretenders’ early classics and revealing how her more recent but lesser-known records are not only underappreciated but actually key to understanding her earlier work, as well as her evolving persona. Sobsey hears Hynde’s music as a way into her life outside the studio, including her feminism, signature style, vegetarianism, and Hinduism. She is “a self-possessed, self-exiled idol with no real forbears and no true musical descendants: a complete original.”

Adam Sobsey is coauthor of Bull City Summer: A Season at the Ballpark, a book about minor league baseball, and has written about music and culture for the Paris Review and other publications.