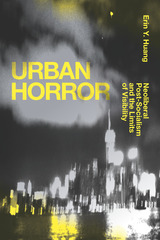 In Urban Horror Erin Y. Huang theorizes the economic, cultural, and political conditions of neoliberal post-socialist China. Drawing on Marxist phenomenology, geography, and aesthetics from Engels and Merleau-Ponty to Lefebvre and Rancière, Huang traces the emergence and mediation of what she calls urban horror—a sociopolitical public affect that exceeds comprehension and provides the grounds for possible future revolutionary dissent. She shows how documentaries, blockbuster feature films, and video art from China, Hong Kong, and Taiwan made between the 1990s and the present rehearse and communicate urban horror. In these films urban horror circulates through myriad urban spaces characterized by the creation of speculative crises, shifting temporalities, and dystopic environments inhospitable to the human body. The cinematic image and the aesthetics of urban horror in neoliberal post-socialist China lay the groundwork for the future to such an extent, Huang contends, that the seeds of dissent at the heart of urban horror make it possible to imagine new forms of resistance.
AUTHOR BIOGRAPHY
Erin Y. Huang is Assistant Professor of East Asian Studies and Comparative Literature at Princeton University.
REVIEWS
-- Rey Chow, author of Sentimental Fabulations, Contemporary Chinese Films: Attachment in the Age of Global Visibility


Acknowledgments  ix
Introduction. Urban Horror: Speculative Futures of Chinese Cinemas  1
1. Cartographies of Socialism and Post-Socialism: The Factory Gate and the Threshold of the Visible World  33
2. Intimate Dystopias: Post-Socialist Femininity and the Marxist-Feminist Interior  69
3. The Post- as Media Time: Documentary Experiments and the Rhetoric of Ruin Gazing  101
4. Post-Socialism in Hong Kong: Zone Urbanism and Marxist Phenomenology  146
5. The Ethics of Representing Precarity: Film in the Era of Global Complicity  184
Epilogue  218
Notes  223
Bibliography  245
Index  259