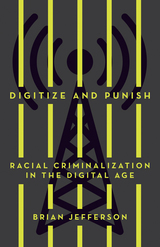 The U.S. Bureau of Justice Statistics estimates that law enforcement agencies have access to more than 100 million names stored in criminal history databases. In some cities, 80 percent of the black male population is registered in these databases. Digitize and Punish explores the long history of digital computing and criminal justice, revealing how big tech, computer scientists, university researchers, and state actors have digitized carceral governance over the past forty years—with devastating impact on poor communities of color.

Providing a comprehensive study of the use of digital technology in American criminal justice, Brian Jefferson shows how the technology has expanded the wars on crime and drugs, enabling our current state of mass incarceration and further entrenching the nation’s racialized policing and punishment. After examining how the criminal justice system conceptualized the benefits of computers to surveil criminalized populations, Jefferson focuses on New York City and Chicago to provide a grounded account of the deployment of digital computing in urban police departments.

By highlighting the intersection of policing and punishment with big data and web technology—resulting in the development of the criminal justice system’s latest tool, crime data centers—Digitize and Punish makes clear the extent to which digital technologies have transformed and intensified the nature of carceral power.

Brian Jefferson is associate professor of geography and geographic information science at the University of Illinois Urbana–Champaign.

4. Punishment in the Network Form

5. How to Program a Carceral City