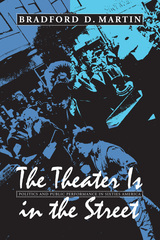 During the 1960s, the SNCC Freedom Singers, The Living Theatre, the Diggers, the Art Workers Coalition, and the Guerrilla Art Action Group fused art and politics by staging unexpected and uninvited performances in public spaces. Through their activism and the response it provoked, art, theater, and politics began to converge and assume a new visibility in everyday life. While their specific political visions varied, these groups shared the impulse to stage performances and actions publicly—"in the streets"—eschewing museums, theaters, and other conventional halls of culture. Bradford D. Martin offers detailed portraits of each of these groups and examines why they embraced public performance as a vehicle to express and advance their politics.

At a time when the New Left and the counterculture were on the rise, these artists reflected the decade's political and cultural radicalism and helped to define a new aesthetic. Civil rights activists mobilized singing in the struggle for desegregation, introducing a vibrant musical form into the public space. The Living Theatre culminated an arduous quest to mesh artistic and political goals, leading audiences from theaters into the streets to begin the "beautiful nonviolent anarchist revolution." The Diggers playfully engaged San Francisco's counterculture in politics with their carnivalesque public actions. The Art Workers Coalition and the Guerrilla Action Art Group sought to disrupt the conventional art world, mounting protests in and around New York City museums.

By questioning the values and assumptions that separated art from politics, these groups not only established public performance as a legitimate aesthetic but also provided a new creative vocabulary for future generations of artists. Their continued involvement with the women's liberation movement, rural communes, and political street theater into the 1970s and beyond challenges the popular myth that activists disengaged from politics after the 1960s.
AUTHOR BIOGRAPHY
Bradford D. Martin earned his doctorate in American studies at Boston University and teaches at Bryant College in Rhode Island.
TABLE OF CONTENTS