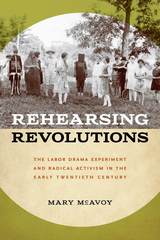 Between the world wars, several labor colleges sprouted up across the U.S. These schools, funded by unions, sought to provide members with adult education while also indoctrinating them into the cause. As Mary McAvoy reveals, a big part of that learning experience centered on the schools’ drama programs. For the first time, Rehearsing Revolutions shows how these left-leaning drama programs prepared American workers for the “on-the-ground” activism emerging across the country. In fact, McAvoy argues, these amateur stages served as training grounds for radical social activism in early twentieth-century America.

Using a wealth of previously unpublished material such as director’s reports, course materials, playscripts, and reviews, McAvoy traces the programs’ evolution from experimental teaching tool to radically politicized training that inspired overt—even militant—labor activism by the late 1930s. All the while, she keeps an eye on larger trends in public life, connecting interwar labor drama to post-war arts-based activism in response to McCarthyism, the Cold War, and the Civil Rights movement. Ultimately, McAvoy asks: What did labor drama do for the workers’ colleges and why did they pursue it? She finds her answer through several different case studies in places like the Portland Labor College and the Highlander Folk School in Tennessee.
AUTHOR BIOGRAPHY
Mary McAvoy is assistant professor in the School of Film, Dance, and Theatre at Arizona State University. She is the coauthor of Drama and Education: Performance Methodologies for Teaching and Learning and coeditor of Youth and Performance: Perceptions of the Contemporary Child.
REVIEWS
“In illuminating theatrical activity at workers’ colleges, McAvoy offers an insightful vision into the pervasiveness and power of theatre in American culture.”—Fonzie D. Geary II, Lyon College
— Fonzie D. Geary II

“The book makes a significant contribution to twentieth-century leftist theatre scholarship by introducing archival materials heretofore forgotten or ignored. Additionally, in a time period when the humanities continue to come under attack for their ‘insignificance,’ the author explicates how even failed attempts at educational change are consequential.”—Chrystyna Dail, author, Stage for Action: U.S. Social Activist Theatre in the 1940s
— Chrystyna Dail