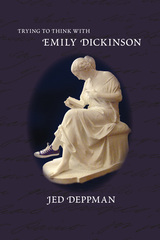 This book presents Emily Dickinson as one of America's great thinkers and argues that she has even more to say to the twenty-first century than she did to the nineteenth. Jed Deppman weaves together many strands in Dickinson's intellectual culture—philosophy, lexicography, religion, experimental science, the female Bildungsroman—and shows how she developed a lyricized, conversational hermeneutics uniquely suited to rethinking
the authoritative discourses of her time.

Through Deppman's original analysis, readers come to see how Dickinson's mind and poetry were informed by two strong but opposing philosophical vocabularies: on the one hand, the Lockean materialism and Scottish Common Sense that dominated her schoolbooks in logic and mental philosophy—Reid, Hedge, Watts, Stewart, Brown, and Upham—and on the other, the neo-Kantian modes of apprehending the supersensible that circulated throughout German idealism and Transcendentalism.

Blending close readings with philosophical and historical approaches, Deppman affirms Dickinson's place in the history of ideas and brings her to the center of postmodern conversations initiated by Jean-François Lyotard, Jean-Luc Nancy, Jacques Derrida, Richard Rorty, and Gianni Vattimo. Trying her out in various postmodern roles—the Nietzschean accomplished nihilist, the Nancian finite thinker, the Vattimian weak thinker, and the Rortian liberal ironist—Deppman adds to the traditional expressive functions of her poetry a valuable, timely, and interpretable layer of philosophical inquiry. Dickinson, it turns out, is an ideal companion for anybody trying to think in the contemporary conditions that Vattimo characterizes as the "weakened experience of truth."
AUTHOR BIOGRAPHY
Jed Deppman is Irvin E. Houck Associate Professor in the Humanities and director of comparative literature at Oberlin College. His work on this book received support from the National Endowment for the Humanities and the Emily Dickinson International Society.
TABLE OF CONTENTS