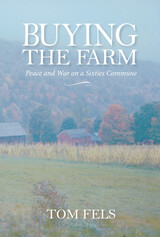 This book tells the story of Montague Farm, an early back-to-the land communal experiment in western Massachusetts, from its beginning in 1968 through the following thirty-five years of its surprisingly long life. Drawing on his own experience as a resident of the farm from 1969 to 1973 and decades of contact with the farm's extended family, Tom Fels provides an insightful account of the history of this iconic alternative community. He follows its trajectory from its heady early days as a pioneering outpost of the counterculture through many years of change, including a period of renewed political activism and, later, increasing episodes of conflict between opposing factions to determine what the farm represented and who would control its destiny.

With deft individual portraits, Fels reveals the social dynamics of the group and explores the ongoing difficulties faced by a commune that was founded in idealism and sought to operate on the model of a leaderless democracy. He draws on a large body of farm-family and 1960s-related writing and the notes of community members to present a variety of points of view. The result is an absorbing narrative that chronicles the positive aspects of Montague Farm while documenting the many challenges and disruptions that marked its history.
AUTHOR BIOGRAPHY
Tom Fels, a museum curator and writer, has for many years researched, written, and lectured on the history of the 1960s. His Farm Friends: From the Late Sixties to the West Seventies and Beyond (2008) received honorable mention for the Eric Hoffer Book Award in independent publishing. For an interview of Fels please see http://wamc.org/post/buying-farm-tom-felsDaniel Aaron, the Victor S. Thomas Professor of English and American Literature Emeritus at Harvard University, is the author of Writers on the Left and numerous other works on American history and culture.For more information, please see the Famous Long Ago Archives at the W.E.B. Du Bois Library, University of Massachusetts Amherst. Books of related interest from UMass Press include Raymond Mungo's Famous Long Ago: My Life and Hard Times with Liberation News Service, Roberta Price's Huerfano: A Memoir of Life in the Counterculture, and Robert Surbrug Jr.'s Beyond Vietnam: The Politics of Protest in Massachusetts, 1974-1990.For a study guide on Buying the Farm, please email UMass Press at info@umpress.umass.edu.