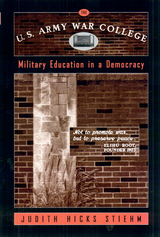 We are all familiar with ROTC, West Point, and other institutions that train young men and women to be military officers. But few people know of the U.S. Army War College, where the Army's elite career officers go for advanced training in strategy, national security policy, and military-government policymaking. This book takes readers inside the U.S. Army War College to learn about the faculty, staff, administration, and curriculum.Established in 1901, the school's mission has evolved from teaching the skills of war to training officers to negotiate both the complex world of modern strategy and the civilian bureaucracy in Washington. More like a professional graduate program than an academic graduate school, much of the education takes the form of exercises and simulations.Judith Stiehm, who holds the U.S. Army Distinguished Civilian Service Medal, allows readers to judge whether the U.S. Army War College successfully prepares its students for their many roles. She is skeptical that instructors can fulfill this difficult task in an era where civilians expect our military to be invincible, to win without casualties, and to serve as peacekeepers.The Military answers to the people of the United States and it is our responsibility to know how it operates at all levels. This book is a good place to start.
AUTHOR BIOGRAPHY
Judith Hicks Stiehm is Professor of Political Science at Florida International University and the author of Arms and the Enlisted Woman; It's Our Military, Too (both published by Temple); and a report on women in peacekeeping for the Lessons Learned Unit of the United Nations' (UN) Department of Peacekeeping Operations. A member of the Council on Foreign Relations, she holds the U.S. Army Distinguished Civilian Service Medal.
REVIEWS
"Judith Stiehm's book provides an excellent history of the U.S. Army College and highlights the importance of quality professional military education in maintaining the strength of the U.S. military. She raises insightful and important questions that should be carefully considered by military officers and policy-makers alike in evaluating the future of the war colleges and the education they provide."—The Honorable Ike Skelton, Ranking Member, House Armed Services Committee


"In this well-researched and crisply written book, Stiehm, a long-time student of military affairs, takes us inside the Army War College. She not only makes us aware of its faculty, staff, administration and curriculum, but also makes specific recommendations for how the War College may serve the military and nation better."—Lawrence J. Korb, Director of Studies at the Council On Foreign Relations and former Assistant Secretary of Defense


"A thoughtful and well-researched study of the Army's prestigious senior service college. The reader has much to consider in drawing his or her own conclusions about the college and its proper direction in a constantly-changing world."—BG Evelyn " Pat " Foote, USA ( Ret.) AWC Faculty 1979-82