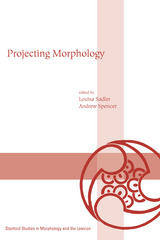 The separation of syntax and morphology is a major principle in contemporary lexicalist theories. The syntactic theory of Lexical-Functional Grammar recognizes this separation on a structural level but argues that both are equal, interacting, and competing contributors in a functional setting. This book discusses the relationship between morphology and LFG, reintroducing two seminal papers on the theory's impact on morphology and presenting new material on current morphological issues, including the nature of morphosyntactic paradigms and the role of optimality theory.
TABLE OF CONTENTS