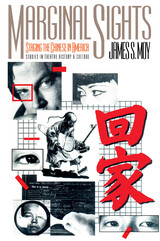 Since the beginning of the Western tradition in drama, dominant cultures have theatrically represented marginal or foreign racial groups as other—different form "normal" people, not completely human, uncivilized, quaint, exotic, comic. Playwrights and audiences alike have been fascinated with racial difference, and this fascination has depended upon a process of fetishization. By the time Asians appeared in the United States, the framework for their constructed Lotus Blossom and Charlie Chan stereotypes had preceded them. InMarginal Sights, James Moy dismantles these stereotypes in an unrelenting attack on Anglo American institutions of racial representation.
Reading the Chinese stereotype through several media, Moy notes the consistency of Anglo America's construction of what he terms Chineseness. He rejects the dominant cultural assertion that stereotypes contain a germ of truth, arguing instead that this so-called germ of truth is itself a construction the serves the evolving social and material concerns of an often sinophobic white America. Through time the stereotypes have taken on a life of their own, and those who sought to overturn them have often failed, thus seemingly validating them. Moy, on the other hand, spotlights the constructed Orientals so brilliantly that the real Asian Americans behind them can become visible at last. Consisting of ten readings of Chineseness in America, this sophisticated text reveals the source of representational racial oppression in America. Moy examines diverse sites of representation from museum displays, cartoons, and plays to early photographs, films, circus acts, performance art, and pornography. His persuasive assault on the responsible institutions is uncompromising. However, with surprising insouciance, Moy juxtaposes wit with the often grim details of America's representational legacy.
While Marginal Sights focuses on Chineseness in America, Moy makes explicit its applicability to all institutionally managed representations, racial and otherwise. Anyone interested in Anglo-American and Asian American studies, cultural and film studies, theatre history, communication, and psychology will need to read this book.
AUTHOR BIOGRAPHY
James Moy is first-generation American-born Chinese. He is a painter and an associate professor at the University of Wisconsin-Madison, where he teaches theatre history and theory.
TABLE OF CONTENTS


Table of contents:
1. Introduction: Siting Race/Staging Chineseness
2. The Panoptic Empire of the Gaze: Authenticity and the Touristic Siting of Chinese America
3. Bret Harte and Mark Twain's Ah Sin: Locating China in the Geography of the American West
4. Henry Grimm's The Chinese Must Go: Theatricalizing Absence Desired
5. Panoptic Containment: The Performance of Anthropology at the Columbian Exposition
6. Animating the Chinese: Psychologizing the Details
7. Casualties of War: The Death of Asia on the American Field of Representation
8. Eugene O'Neill's Marco Millions: Desiring Marginality and the Dematerialization of Asia
9. Disfiguring The Castle of Fu Manchu: Racism Reinscribed in the Playground of the Postmodern
10. Flawed Self-Representations: Authenticating Chinese American Marginality
11. Imperial Pornographies of Virtuosity: Problematizing Asian American Life