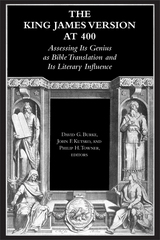 In this collection of essays, thirty scholars from diverse disciplines offer their unique perspectives on the genius of the King James Version, a translation whose 400th anniversary was recently celebrated throughout the English-speaking world. While avoiding nostalgia and hagiography, each author clearly appreciates the monumental, formative role the KJV has had on religious and civil life on both sides of the Atlantic (and beyond) as well as on the English language itself. In part 1 the essayists look at the KJV in its historical contexts—the politics and rapid language growth of the era, the emerging printing and travel industries, and the way women are depicted in the text (and later feminist responses to such depictions). Part 2 takes a closer look at the KJV as a translation and the powerful precedents it set for all translations to follow, with the essayists exploring the translators’ principles and processes (with close examinations of “Bancroft’s Rules” and the Prefaces), assessing later revisions of the text, and reviewing the translation’s influence on the English language, textual criticism, and the practice of translation in Jewish and Chinese contexts. Part 3 looks at the various ways the KJV has impacted the English language and literature, the practice of religion (including within the African American and Eastern Orthodox churches), and the broader culture.
The contributors are Robert Alter, C. Clifton Black, David G. Burke, Richard A. Burridge, David J. A. Clines, Simon Crisp, David J. Davis, James D. G. Dunn, Lori Anne Ferrell, Leonard J. Greenspoon, Robin Griffith-Jones, Malcolm Guite, Andrew E. Hill, John F. Kutsko, Seth Lerer, Barbara K. Lewalski, Jacobus A. Naudé, David Norton, Jon Pahl, Kuo-Wei Peng, Deborah W. Rooke, Rodney Sadler Jr., Katharine Doob Sakenfeld, Harold Scanlin, Naomi Seidman, Christopher Southgate, R. S. Sugirtharajah, Joan Taylor, Graham Tomlin, Philip H. Towner, David Trobisch, and N. T. Wright.
AUTHOR BIOGRAPHY
David G. Burke served as Director of the Translations Department and as the first dean of the Eugene A. Nida Institute for Biblical Scholarship at the American Bible Society. He is the author of The Poetry of Baruch and editor of Translation That Openeth the Window: Reflections on the History and Legacy of the King James Bible (both from Society of Biblical Literature). John F. Kutsko is Executive Director of the Society of Biblical Literature and the author of Between Heaven and Earth: Divine Presence and Absence in the Book of Ezekiel (Eisenbrauns). Philip H. Towner is Dean of the Eugene A. Nida Institute for Biblical Scholarship at ABS and holds several visiting lecture positions in Europe. He is the author of The Letters to Timothy and Titus (Eerdmans) and 1–2 Timothy and Titus (IVP Academic).
TABLE OF CONTENTS
Contents
Foreword: Vital Aspects of the KJV Genius
Preface and Acknowledgments
The Editors to the Reader
Rendering Voices: A Poem for the 400th Anniversary of the King James Bible
The KJV at 400: Assessing Its Genius as Bible Translation and Its Literary Influence
Part 1: The King James Version in Its Historical Context
The King James Bible in Early Modern Political Context
The KJV and the Rapid Growth of English in the Elizabethan-Jacobean Era
English Printing before the King James Bible: A Reconsideration
The King James Bible and the Language of Liturgy
The KJV and Women: Soundings and Suggestions
John Speed’s “Canaan” and British Travel to Palestine: A Journey with Maps
Part 2: KJV in the History of Bible Translation
Luther’s Approach to Bible Translation and the KJV
Revising the KJV: Seventeenth through Nineteenth Century
The Role of the Metatexts in the King James Version as a Means of Mediating Conflicting Theological Views
Priorities, Principles, and Prefaces: From the KJV to Today (1611–2011)
The KJV and the Development of Text Criticism
The KJV Translation of the Old Testament: The Case of Job
The KJV New Testament: What Worked for the Translators and What Did Not?
The KJV and Anglo-Jewish Translations of the Bible: A Unique and Uniquely Fruitful Connection
The Influence of the KJV in Protestant Chinese Bible Translation Work
The Monarchs and the Message: Reflections on Bible Translation from the Sixteenth to the Twenty-First Century
Part 3: The Impact of the King James Version: Its Reception and Influence
The Question of Eloquence in the King James Version
The King James Bible Apocrypha: When and Why Lost?
“Not of an Age, But for All Time”: King James and Master Will, Words with Thoughts
The Word and the Words: Andrewes, Donne, and the Theology of Translation
The KJV and the Seventeenth-Century Religious Lyric
The King James Bible: Messianic Meditations
America’s King of Kings: The King James Bible and American Civil Religion
The KJV in Orthodox Perspective
African Americans and the King James Version of the Bible
“A New Garb for the Jewish Soul”: The JPS Bible in the Light of the King James Bible
The Master Copy: Postcolonial Notes on the King James Bible
Select Bibliography
Contributors
Index