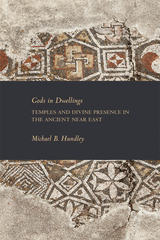 In this book devoted exclusively to temples and perceptions of the divine presences that inhabit them, Michael B. Hundley focuses on the official religions of the ancient Near East and explores the interface between the human and the divine within temple environs.

Hundley identifies common ancient Near Eastern temple systems and examines issues that include what temple structures communicate, how temples were understood to function, temple ideology, the installation of divine presence in a temple, the connection between presence and physical representation, and human service to the deity.

Michael B. Hundley is Adjunct Professor in the Department of Theology and Religious Studies at Georgetown University. His work focuses on the intersection of human and divine in the Hebrew Bible and the ancient Near East, and he is the author of Keeping Heaven on Earth: Safeguarding the Divine Presence in the Priestly Tabernacle (Mohr Siebeck).