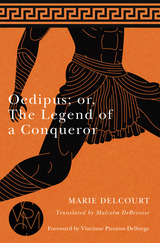 Marie Delcourt’s brilliant study of the Oedipus legend, an unjustly neglected monument of twentieth-century classical scholarship published in 1944 and issued here for the first time in English translation, bridges the gap between Carl Robert’s influential Oidipus (1915) and the work of Lowell Edmunds seventy years later. Delcourt studies the legend in its various aspects, six episodes that have equal weight and that stress the same themes: greatness, conquest, domination, the right to rule—all of them bound up with the idea of kingship. Together they form the biography of a Theban hero, the fullest account that has come down to us about the prehistory of sovereign power among the ancient Greeks. Delcourt does not suppose that Oedipus, or indeed any other Greek hero, was a historical figure. The personality familiar to us from the plays of the tragedians of the fifth century—our oldest source, and a very late one—was the result of their extraordinary artistry in linking together themes rooted in very ancient social and religious rites that in the interval had come to describe the feats of Oedipus, then his life, and finally his character. It was in order to explain these rites, whose meaning had ceased to be understood, that myths and legends were invented in the first place. Oedipus, Delcourt argues, is the archetype of all heroes of essentially (if not exclusively) ritual origin, whose acts were prior to their person. This is a very different— and far more complex—Oedipus than the one rather implausibly imagined by Freud. More generally, the origin and transmission of the Oedipus legend tells us a great deal about the strength and persistence of public memories in prehistoric societies.
AUTHOR BIOGRAPHY
MARIE DELCOURT (1891–1979) was Professor of Classical Philology at the University of Liège for more than three decades and the author of many works, including translations, biographies, and studies in the mythology and religion of ancient Greece.

MALCOLM DEBEVOISE is a three-time winner of the French-American Foundation Prize for nonfiction and has translated more than forty works from French and Italian in all branches of scholarship.
TABLE OF CONTENTS
Contents
Foreword-Vinciane Pirenne-Delforge
Translator’s Note
Introduction
Chapter 1. Exposure of the Infant
Chapter 2. Murder of the Father
Chapter 3. Victory over the Sphinx
Chapter 4. The Riddle
Chapter 5. Marriage to a Princess
Chapter 6. Incest with the Mother
Endings
Myths and Memory
Appendix 1. The Pisander Scholion and Related Summaries
Appendix 2. Legends and Cults of Twin Children
Appendix 3. Animal Tales in Greece
Appendix 4. The Religious Significance of Spoils in the Homeric Poems
Notes
Addenda
Index of Passages Cited
Index
REQUEST ACCESSIBLE FILE