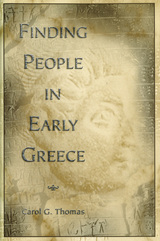 Progress toward a fuller understanding of preclassical Greece was steady until the 1950s, when a general crisis in all the human-centered disciplines erupted. Scholars undertook a serious reexamination of their tools and data, producing new brands of history, geography, anthropology, archaeology, economics, and sociology. Although these new approaches were widely adopted, the developments also bred a countercurrent beginning in the 1980s and 1990s. The fallout from this backlash was serious in several respects, one of the most important of which was the elimination of the human element in the products of the “new” human-centered disciplines.
In Finding People in Early Greece, Carol Thomas addresses these developments and the recent accommodation and rapprochement of the “old” and “new” that has emerged. She then offers two case studies: Jason and the voyage of the Argo, deriving from the “Age of Heroes,” and Hesiod, probably the first literate European, who lived ca. 700 BCE during the “Age of Revolution,” which catapulted Greece out of its long Dark Age into the vibrant Classical Age. With these two examples, Thomas shows that through a combination of scientific tools and historically oriented scholarship, a larger context in which individual subjects lived can be offered.
AUTHOR BIOGRAPHY
Carol G. Thomas is Professor of History at the University of Washington in Seattle. She is the author or editor of numerous books, including Progress into the Past: The Rediscovery of Mycenaean Civilization and Citadel to City-State: The Transformation of Greece, 1200-700 B.C.E.
TABLE OF CONTENTS