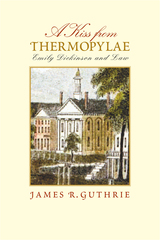 Born into a family of attorneys, Dickinson absorbed law at home. She employed legal terms and concepts regularly in her writings, and her metaphors grounded in law derive much of their expressive power from a comparatively sophisticated lay knowledge of the various legal and political issues that were roiling nineteenth-century America. Dickinson displays interest in such areas as criminal law, contracts, equity, property, estate law, and bankruptcy. She also held in high regard the role of law in resolving disputes and maintaining civic order. Toward the end of her life, Dickinson cited the Spartans' defense at Thermopylae as an object lesson demonstrating why societies should uphold the rule of law.

Yet Dickinson was also capable of criticizing, even satirizing, law and lawyers. Her poetic personae inhabit various legal roles including those of jurymen, judges, and attorneys, and some poems simulate courtroom contests pitting the rights of individuals against the power of the state. She was keenly interested in legal matters pertaining to women, such as breach of promise, dower, and trusts. With her tone ranging from subservient to domineering, from reverential to ridiculing, Dickinson's writings reflect an abiding concern with philosophic and political principles underpinning the law, as well as an identification with the plight of individuals who dared confront authority.

A Kiss from Thermopylae reveals a new dimension of Dickinson's writing and thinking, one indicating that she was thoroughly familiar with the legal community's idiomatic language, actively engaged with contemporary political and ethical questions, and skilled at deploying a poetic register ranging from high romanticism to low humor.
AUTHOR BIOGRAPHY
James R. Guthrie is professor of English at Wright State University. He is author of Above Time: Emerson's and Thoreau's Temporal Revolutions and Emily Dickinson's Vision: Illness and Identity in Her Poetry.