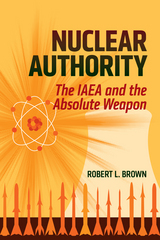 Once dismissed as ineffectual, the International Atomic Energy Agency (IAEA) has in the past twenty years emerged as a powerful international organization. Member states allow the IAEA to render judgment on matters vital to peace and security while nations around the globe comply with its rules and commands on proliferation, safety, and a range of other issues.

Robert L. Brown details the IAEA’s role in facilitating both control of nuclear weapons and the safe exploitation of nuclear power. As he shows, the IAEA has acquired a surprising amount of power as states, for political and technological reasons, turn to it to supply policy cooperation and to act as an agent for their security and safety. The agency’s success in gaining and holding authority rests in part on its ability to apply politically neutral expertise that produces beneficial policy outcomes. But Brown also delves into the puzzle of how an agency created by states to aid cooperation has acquired power over them.

Robert L. Brown is an assistant professor in the Department of Political Science at Temple University.