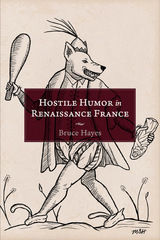 In sixteenth-century France, the level of jokes, irony, and ridicule found in pamphlets and plays became aggressively hostile. In Hostile Humor in Renaissance France, Bruce Hayes investigates this period leading up to the French Wars of Religion, when a deliberately harmful and destructive form of satire appeared.

This study examines both pamphlets and plays to show how this new form of humor emerged that attacked religious practices and people in ways that forever changed the nature of satire and religious debate in France. Hayes explores this phenomenon in the context of the Catholic and Protestant conflict to reveal new insights about the society that both exploited and vilified this kind of satire.

AUTHOR BIOGRAPHY
Bruce Hayes is Professor of French and Chair of the Department of French and Italian at the University of Kansas.