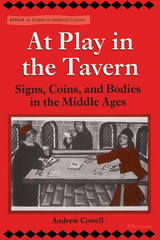 At Play in the Tavern: Signs, Coins, and Bodies in the Middle Ages
by James Andrew Cowell
University of Michigan Press, 1999
Cloth: 978-0-472-11007-0
At Play in the Tavern is a lively study of the tavern, inn, and brothel in the literature of medieval France. Cowell's original treatment of the medieval tavern as a counterpoint to orthodox institutions considers such delicious transgressions as drinking, gambling, prostitution, theft, usury, and "foile" (a peculiar combination of madness and sinfulness). This innovative study of both market-place values and literary culture unveils a raucous culture opposed to the dominant models of society coming out of the Augustinian tradition. Cowell contrasts the literary domains of the carnal and the orthodox and innovatively assigns physical space to each. The literature of the tavern is shown to represent the possibility of escape from ecclesiastical models of economic and literary exchange that insisted on equality, utility, and charity by offering a vision of exuberant excess. Cowell concludes that drama, poetry, and other secular texts, when considered as a whole, are ultimately complicit in a revolution favoring an ethic of profit.
Drawing on recent work in medieval literature, history, popular culture, gender studies, and sign theory, Andrew Cowell employs a wide range of traditional and, until now, little known sources to show the unity and importance of a countercultural literary mode.
Andrew Cowell is Assistant Professor, Department of French and Italian, University of Colorado at Boulder.
REVIEWS
"Cowell has made a great (and successful) effort to bring together many entertaining and culturally interesting works that, despite their obvious popularity and relevance to the Middle Ages, have been much ignored by scholarship that tends to focus more on the canon. His book thus has much to offer both specialists and non-specialists alike."
—Envoi
— Laurel Amtower, San Diego State Univ, Envoi