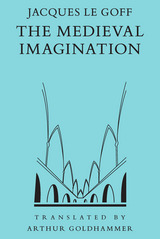 To write this history of the imagination, Le Goff has recreated the mental structures of medieval men and women by analyzing the images of man as microcosm and the Church as mystical body; the symbols of power such as flags and oriflammes; and the contradictory world of dreams, marvels, devils, and wild forests.

"Le Goff is one of the most distinguished of the French medieval historians of his generation . . . he has exercised immense influence."—Maurice Keen, New York Review of Books

"The whole book turns on a fascinating blend of the brutally materialistic and the generously imaginative."—Tom Shippey, London Review of Books


Translator's Note
Introduction
For an Extended Middle Ages
Part One: The Marvelous
The Marvelous in the Medieval West
Part Two: Space and Time
The Wilderness in the Medieval West
The Perception of Christendom by the Roman Curia and the Organization of an Ecumenical Countil in 1274
The Time of Purgatory (Third to Thirteenth Century)
The Time of the Exemplum (Thirteenth Century)
Part Three: The Body
Body and Ideology in the Medieval West
Gestures in Purgatory
The Repudiation of Pleasure
Part Four: Literature and Imagination
Lévi-Strauss in Broceliande: A Brief Analysis of a Courtly Romance
Vestimentary and Alimentary Codes in Erec et Enide
Warriors and Conquering Bourgeois: The Image of the City in Twelfth-Century French Literature
An Urban Metaphor of William of Auvergne
Social Realities and Ideological Codes in the Early Thirteenth Century: An Exemplum by James of Vitry
Part Five: Dreams
Christianity and Dreams (Second to Seventh Century)
The Dreams of Helmbrecht the Elder
Notes
Index