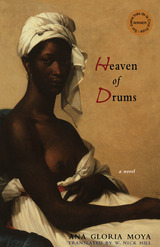 This story of love and revolution takes place during the Argentine struggle for independence (1810-1820) and focuses on the character of the national hero, Manuel Belgrano. Belgrano's story is told through the voices of the real heroes of the novel—María Kumbá a mulatto healer-priestess, fighter, and nurse to the common soldiers; and Gregorio Rivas, mestizo son of a well-to-do Spanish businessman.

Heaven of Drums (Cielo de tambores) is filled with political and personal intrigue. At the core of the novel is the issue of racial discrimination. Belgrano is blinded to the love María has for him and the good counsel she has to offer because of his contempt for blacks. His open contempt for Rivas as a mestizo leads to his death. Rivas becomes María's lover but is always haunted by María's evident adoration of Belgrano. The manner in which the love-hate triangle plays out is filled with surprises and cuts to the heart of Argentina's troubled identity.

AUTHOR BIOGRAPHY
Ana Gloria Moya was an Argentine novelist who achieved international recognition. She published three works of fiction that won a number of awards in her native country. Heaven of Drums won the Sor Juana Inés de la Cruz Prize awarded at the International Guadalajara Book Fair. In addition to being an author, she worked as a lawyer in the Province of Salta, Argentina. She died in 2013.

W. Nick Hill is an American poet and translator. Until his retirement in 2005, he was a professor at Fairfield University, where he served as the director of Latin American and Caribbean Studies. He has published essays on Spanish American Literature, translations of Miguel Barnet's Biography of a Runaway Slave and Rachel's Song, and an award-winning poetry chapbook. He lives in Port Townsend, WA.
REQUEST ACCESSIBLE FILE