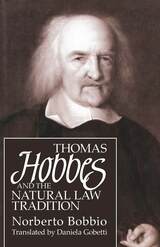 Pre-eminent among European political philosophers, Norberto Bobbio has throughout his career turned to the political theory of Thomas Hobbes. Gathered here for the first time are the most important of his essays which together provide both a valuable introduction to Hobbes's thought and a fresh understanding of Hobbes's place in the theory of modern politics.

Tracing Hobbes's work through De Cive and Leviathan, Bobbio identifies the philosopher's relation to the tradition of natural law. That Hobbes must now be understood in both this tradition as well as in the seemingly contradictory positivist tradition becomes clear for the first time in Bobbio's account. Bobbio also demonstrates that Hobbes cannot be easily labelled "liberal" or "totalitarian"; in Bobbio's provocative analysis of Hobbes's justification of the state, Hobbes emerges as a true conservative.

Though his primary concern is to reconstruct the inner logic of Hobbes's thought, Bobbio is also attentive to the philosopher's biography and weaves into his analysis details of Hobbes's life and world—his exile in France, his relation with the Mersenne circle, his disputes with Anglican bishops, and accusations of heresy leveled against him. The result is a revealing, thoroughly new portrait of the first theorist of the modern state.


Preface
Author's Note
One - The Conceptual Model of Natural Law Theory
1. Elements of the Model
2. Variations on the Theme
3. The Alternative Method
4. Elements of the Alternative Model
5. The Conceptual Model of Natural Law Theory and Bourgeois Society
6. The Family and the State of Nature
7. The Family in the Conceptual Model of Natural Law Theory
8. the Bourgeois Family
9. A Proof "to the Contrary"
10. The End of the Model
Two - Hobbes's Political Theory
1. Works
2. The Leading Idea
3. The Method
4. Artificial Man
5. The State of Nature
6. The War of All against All
7. The Dictates of Right Reason
8. The Covenant of Union
9. Sovereignty Is Irrevocable
10. Sovereignty Is Absolute
11. Civil Laws
12. Sovereignty Is Indivisible
13. Church and State
14. Hobbes and His Critics
15. Hobbes Interpreted
Three - Introduction to De Cive
Appendix: Introduction to A Dialogue between a Philosopher and a Student of the Common Law of England
Four- Natural Law and Civil Law in the Political Philosophy of Hobbes
Five - Hobbes and Natural Law Theory
Six - Hobbes and Partial Societies
Seven - By Way of Conclusion
Appendix
Considerations upon the Reputation, Loyalty, Manners and Religion of Thomas Hobbes of Malmesbury
A Brief History of Hobbesian Historiography
Three Books on Hobbes
Index